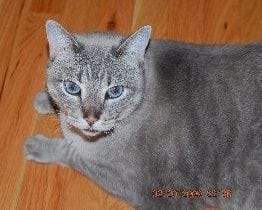 The Love of Lucky

Lucky was abandoned as a tiny kitten. He was found by my aunt who fed him up until he was big enough to eat on his own. He was found on Christmas of 2001 or 2002, so we just say that that is his birthday.

After staying awhile with them, we drove 14 hours to go pick him up in West Virginia from Iowa. He was never good in cars, which we learned. He quickly became attached to me, the oldest daughter. We grew up together. I have memories of getting in trouble for staying up too late and playing with him. I have a memory of waking up to him biting my cheek because I accidentally kicked him while sleeping. He never liked my middle sister that much. We think it was because she came into his terroritory. Nonetheless though, he still watched over us. He was very protective of my youngest sister. One time, my aunt was crawling around on the floor with her and he thought she was going to harm her, so he pounced my aunt and bit her right on the butt. She never forgave him for that one.

As we grew as a family, Lucky watched over us all. In truth, he paid all of us a lot of attention equally, pulling a little toward my mom and I a bit more. He would snuggle up with anyone, though. He would spent whole nights in the same spot on your bed. He would take up the whole bed and have no regards for your slow slipping off of the bed. What animal does, though? He would listen to you when you needed to talk or cry. He would be your pillow and literal shoulder to cry on. He never minded me falling asleep with my head literally on his body. In fact, it’s often how we slept.

Lucky absolutely hates one of our yorkies. They have never gotten along and would squabble at least everyday. Our golden retriever, on the other hand, was allowed him as much as she wanted to be. As a past mother, she would give him nightly tongue baths. They would snuggle up and sleep. Surprisingly, he didn’t even mind the little teacup yorkie we got. No matter how much she thought she could threaten him. He was like, “Look little girl, I’ve put up with three of you already, you don’t phase me.” He even got along with the two new cats we brought into our lives, without much of a care. In fact, it brought a long lost kitten side out of him and he would play around and wrestle with them.

Lucky had a tumor in his chin that constantly mad whom look extremely grumpy. This was a result of a high fall from a stair case. He thought it was easiest to jump from the stairs to the stair platform. Well, that failed one day. We thought that a tree fell on the house. It was just him, though. It never bothered him much, just gave him a bit of a funny look. And got us a bunch of, “Why is his chin like that?”

As Lucky aged, we began to give into his extreme love for any type of meat we ate at dinner. For the last two years, he has had his own little place at the table. Everytime we ate a meat he would like, we would tear it into small shreds and he would devour it. Ham and chicken were his favorite. He got away with almost anything because, hey, he was old and anyday could be his last.

I never expected that day to come so soon. One day I noticed his breathing was off. When you watch an animal everyday you can remember, you know when something is off. My mom took him to the vet, expecting it to be something like pneumonia. It was heart cancer. A tumor had taken over our boy’s heart and his lungs were beginning to be compressed by fluid. She said he could have days to a few weeks. Our boy lived for three weeks, fighting it. He fought and he fought. His body was ready to go, but he wasn’t. We had him put to sleep on August 12th. He finally stopped fighting, he knew it was time. Our boy went peacefully and loved as much as a cat could be.

Soon he will be next to his old bubba boy Fletch, in their beautiful urns, to forever be kept with us.

Another things I wrote about my beautiful boy:
“On the night of August 11th, I said goodbye to my best friend forever. My sisters and I wrapped him in his favorite blanket and gave him his favorite toy. He didn’t want to give up his fight though, but his body was ready to give up. He was so determined to stay around, but he was so tired and we made the hard choice of putting him to sleep the next morning. He went peacefully and loved, as loved as any cat could be.

I know that there will never be another cat in my life like him. Not one that could love me and my sisters as this one did. My dad had to tell him, “You can go if you want to. I promise we will take care of your girls for you.” That’s just how he was. He was always there, watching over us and making sure we were okay. Up until two days ago, despite how tired he was getting, he would come upstairs and lay in front of my door and watch me. Even in his final days, all he wanted to do was make sure we were okay.

I don’t know what I’m going to do without you, buddy. But I’m so thankful I got the near 14 years I’ve had with you. Because you filled them with love and laughter. You taught me the importance of loving animals like you love one another. Because they are family, you are my family. And I’ll never forget you.

A friend told me that a being dies twice. Once when their body goes and again when they are no longer thought of. But there will never be a day where I don’t think of you and everything you’ve given for me and done for me. You will live on forever in my heart.

Lucky, I am lucky to have had you in my life.”